Links to three fragments from a 1968 movie (well: hardly anything 'moves', it's more a 'statement'), The Chronicle of Anna Magdalena Bach, original title: "Chronik der Anna Magdalena Bach", in which Leonhardt plays the role of J.S. Bach. The movie stays as far away as possible from romantic Bach biopics. Hence the awkwardness of the players and the absence of any emotion in diction, kind of deliberately making a bad film. However, the mise-en-scène of the musicians performing Church Music is quite nice: around the grand organ, all together. Below the propaganda-poster, three fragments I cut from the movie, all with musicians performing a cantata (or even the Great Passion) on an organ gallery... 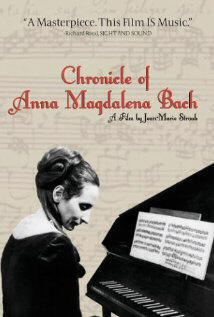